Is Maslow’s hierarchy of needs comparable with Rimworld?

How randomness in Rimworld creates a fun and immersive story driven experience.

With almost a million owners, Rimworld could be said to be an indie game done right. The game is quickly approaching version 1.0 – having been in Beta since November 2017. The game is a top-down construction and management simulation set on another planet in a dystopian future. The game features AI storytellers that have variable difficulty levels, these include Cassandra Classic, Phoebe Chillax and Randy Random. The AI’s affect when random events should take place – the nature of these events and the severity, which increases over time. The difficulty also increases or decreases the base mood of the colonists. 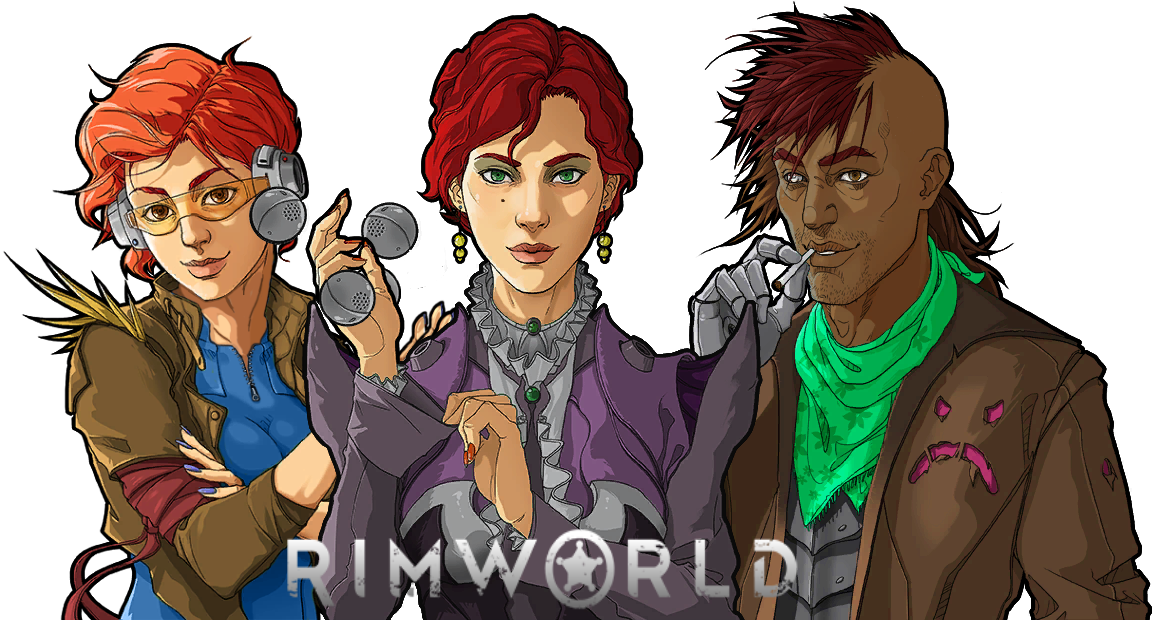 After setting up the scenario, planet conditions, choosing your storyteller, difficulty, the colonists and the crash site, the player finds themselves with usually 3 or four colonists who have crash landed on the planet and must survive. The player must then priorities what the colonists should work on, with each colonist having different skills which affects their work skills – so for example a ‘pawn’ (a term used to describe a colonist) may be very good at building which both speeds up construction and reduces the chances construction will fail. Another pawn may be good at creating art, which can be useful in generating income in the later game through trading with other groups on the planet.

So the early game involves the player viewing the map to see what resources may be there, what land formations may be useful and any possible dangers. The player should find a location where a basic house, or room can be constructed which will give the pawns somewhere to sleep. Additionally on very cold or very warm maps the room can be equipped with heating or cooling (Or both). Both heating and cooling will generally require electricity, though passive coolers may be available if the player has chosen to start with less technology. In the early game the player generally has access to both solar panels and wind turbines which provide intermittent power. This power can be stored in a battery.

On crash landing the pawns will generally have about a weeks worth of food. The player would be wise to get this food and other materials into a room, or preferably a cold room for perishable food. A cold room can use cooling to lower the temperature to around freezing meaning the food will last forever. The player had two options depending on the map and conditions – they can either gather food from the local area which may be growing naturally, healing herbs and stimulants can also sometimes be gathered too. The second option is to farm. The game by default has a range of food, medical crops and trees which can be planted in a designated area.

Colonies can grow in a number of ways. One of these is capturing an enemy during a raid, locking them in a prison and convincing them to join you. Sometimes people also seek sanctuary from their enemies in your colony, but you may need to fight off their enemies. There are also other ways to grow the colony.

The health of the pawns is another basic need. The pawn’s health will slowly deteriorate with age, however accidents like cave-ins or being attacked will also lower health. It is possible to replace organs if an organ is damaged – and if the pawn is addicted to a drug they can become free of the drug but will suffer withdraw. There is a drug called Luciferin which will significantly boost the pawns abilities, however the pawn will die unless a good supply of Luciferin can be maintained. There are methods, such as suspended animation pods, that can be used in the late game if the supply of Luciferin runs out. 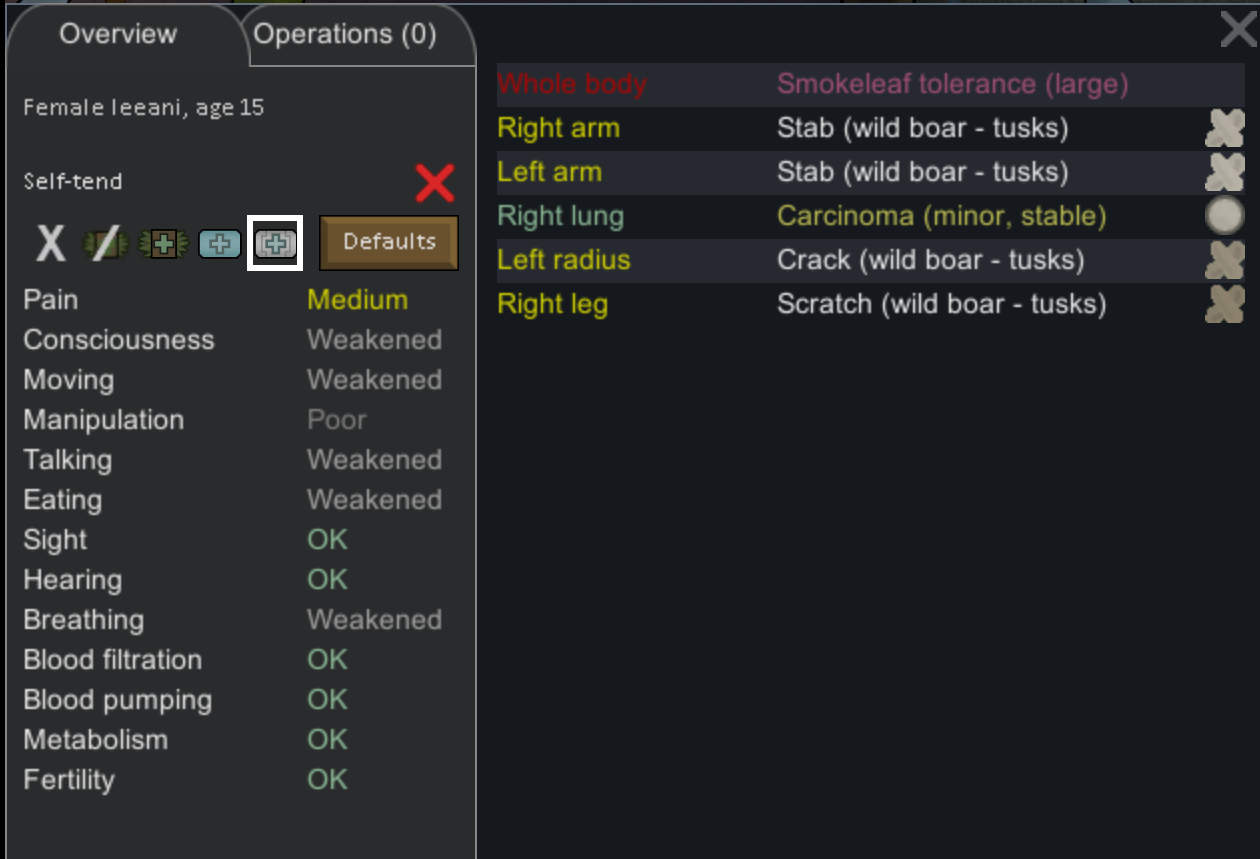 This game roughly mirrors Maslow’s hierarchy of needs, which is a theory in psychology proposed by Abraham Maslow which basically relates to human motivation. The theory states the most basic needs must be taken care of first before the higher needs should be taken out. In Rimworld, for example, a colony that specializes in art and neglects food will be unlikely to survive very long. 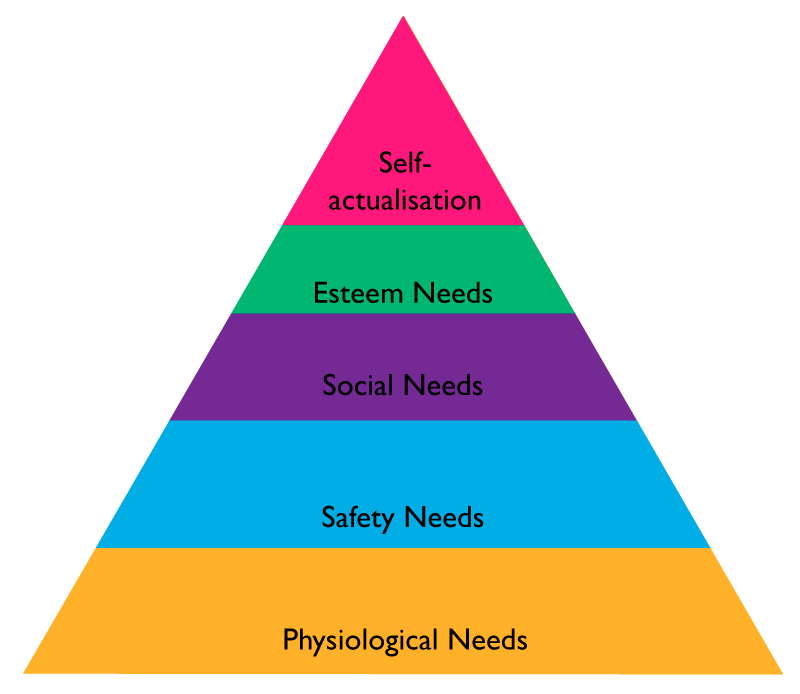 The physical needs include bedrooms or bunkhouses, some food should be grown and cooked and frozen. This task is ongoing, but once a stable source of food is established other tasks can be undertaken.

Safely is next: So this includes creating weapons to fight off an attacking tribe: these can be in the form of swords, sticks, guns or even automated guns when the materials are available. Additionally building fortifications will give your pawns an advantage in battle.

Safely also includes protection from the elements, so this includes heating and cooling houses as well as making clothing, which also requires fur from animals or cloth from cotton plants. A pawn will require a tailor’s workbench to create clothes.

A player may also need to mine materials such as metals which are used in trade and construction. Silver is used as the game’s currency.

Social needs come next – once the basic colony is working a player should increase the time pawns spend sleeping. This seems to improve their mood and reduce the chance they will be afflicted by a mental breakdown. Leisure time can also be set where pawns will play games such as horseshoe pin, chess, Billiards Table and even TV’s in the later game. Communal areas should be established, such as a dining room. The pawns gain a lot of pleasure from ‘eating at table’.

Beer and ‘smokeleaf‘ production takes work and time – however it’s well worth it as these items can make a pawn happier as well as providing nutrition and mild pain relief in the case of smokeleaf.

Additionally some pawns may pair off and they will probably want to share a double bed. Also if one of the colonists is killed in a raid, for example, this will make the other pawns who knew them very sad. If a large number of colonists die the resulting unhappiness can create a despair spiral which can actually end a colony.

Esteem Needs come next – Once the colony has built up some silver reserves, it is possible to start to build strong trading relations with other tribes. Some traders will come to trade normally with you, but later on you can create trade groups yourself or pay other groups to send a trading party. This is a great way to secure materials such as components for construction or other materials, or animals, which can be bread and provide fur and meat and can be farmed.

Pawns can form a strong bond with an animal, which becomes their pet – pets will however need food. If the pet is a carnivore it may need to hunt for food, or will eat your colony’s food reserves if it is allowed to roam in that area.

So Esteem is primarily generated through letting the pawn work in the area they love. Some skills will generate happiness. The below image shows that for Doc Mining will generate a lot of happiness for this pawn. Doc will also learn mining more quickly. The success of a colony can depend on having pawns utilizing the skills they are best at, however once the colony is stable, allowing colonists to specialize at the tasks they enjoy will improve their overall happiness. 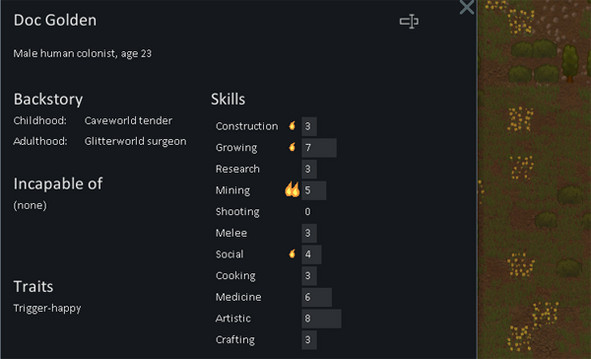 the realization or fulfillment of one’s talents and potentialities, especially considered as a drive or need present in everyone.

In RimWorld self-actualization comes from a pawns individual needs being fulfilled. It’s hard to generalize as every pawn will have different needs. The following pawn doesn’t look to be having a very good time. Things like building an impressive looking colony that contains valuable items made from fine materials like gold and jade, an impressive large bedroom, a job they enjoy, good relationships with the other colonists and good health all contribute to happiness. Each individual has a needs tab which lets the player know what the pawn wants to make them happy. 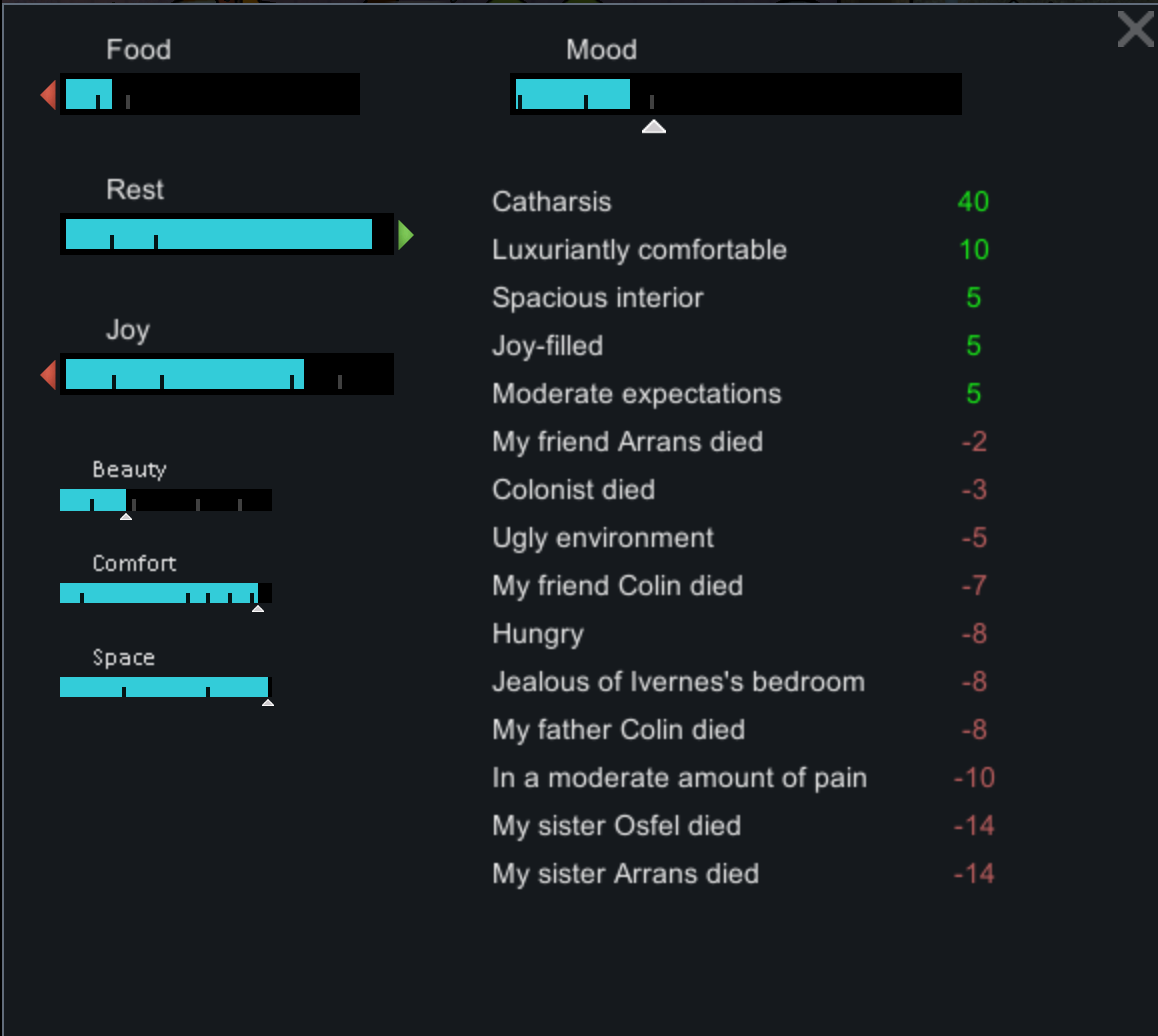 So having played the base game, as well as playing with many mods, RimWorld does leave you with with the story of life. Maslow’s hierarchy of needs is just as true in RimWorld as it is in our own, though the pawns in this game and real people have a fundamental difference. Psychological research on happiness suggests our levels of happiness remain largely consistent over the long term. We have a tenancy to take things for granted. Perhaps on a happier note we should take away from this a happier message. A large source of happiness in RimWorld comes from doing a job you enjoy, family and community, Good food and beer! Perhaps we should try to appreciate everything we have and to count our blessings.